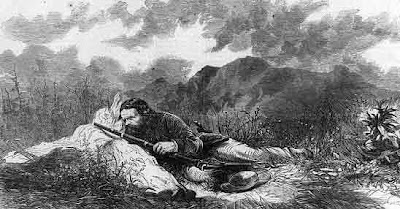 Estimates vary on the number of troops facing each other at Fort Donelson on this spring-like morning: perhaps 15,000 or more Union troops outside the forts’ works; perhaps 16,000 inside the fort. Halleck is forwarding still more troops, who have yet to arrive.

“Birge’s Western Sharp-Shooters” were awake and moving about before dawn. (Pictured above: a typical sharpshooter in action, but not of Birge's force) The sharpshooters were what we call snipers, an elite force specially trained in stealth and marksmanship—ancestors of today’s Special Forces. Birge's force was the Western Theater's counterpart to the more famous "Berdan's Sharp Shooters," attached to the Army of the Potomac.

Still not a complete regiment, Birge’s force includes companies recruited from several western states, including one organized at Dayton, Ohio. Two more Ohio regiments will eventually join Birge's force.. According to Lew Wallace writing after the war, each sharpshooter carried a special long-range “deer rifle” (the “Henry Rifle”) and operated independently. This morning, after officers made sure their men’s canteens were full and they had a day’s supply of “crackers” (hardtack), the men were told, “All right; hunt your holes, boys,” and they scattered, concealing themselves behind stumps, in trees, or in holes they dug themselves.

The members of Birge’s elite were colorful to look at: instead of a regulation bullet case, they carried a bearskin pouch holding bullets they molded themselves. Although Birge's men had to wear regulation uniforms, their headgear was a gray “sugar-loaf affair,” with three squirrel tails running from front to back, meeting at the top of the crown. Nicknamed the “Squirrel Tails,” the sharpshooters were commanded by Lt. Col. John M. Birge, from St. Louis.

In early afternoon, although Grant had ordered nothing be done to bring on a general engagement, an impatient Brig.Gen. John A. McClernand—a “political general” with limited military experience—ordered repeated, failed attacks on a Confederate battery. However, the attacks may have concealed the weakness of Grant’s force.

Afternoon also brought a painful change in the weather, from spring-like to cold, sleet, and snow. Troops who had thrown away their blankets and warm clothing on the march from Fort Henry now were ill-prepared for harsh weather, and suffered greatly.

As night fell, Grant’s shivering soldiers were settling down to conduct a siege. It appeared they lacked the numbers to attack the fortification head-on, for the usual rule of thumb was that the attacking force needed three to five times--if not more--as many men as the defenders.

It is a cardinal rule in warfare, however, that nothing ever goes exactly as planned—nor would it here.