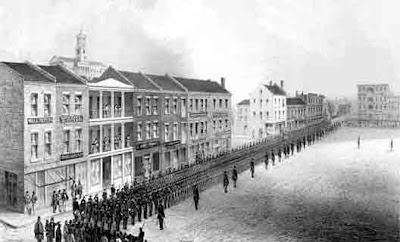 “Best soldier in the world”

1. “There will be bayonet exercise…from nine to ten a.m. and battalion drill from eleven to twelve.

2. “At four p.m….the regimental grounds [will] be thoroughly policed under direction of the officer of the day.

3. Officers’ drill, until further orders, will be that of skirmishers. None are excused from the above duties…”

In what his men would undoubtedly have called an understatement, Hazen fondly recalled that “While at Nashville, we were very busily engaged with drills and preparation for moving forward.”

Two days before, Hazen’s 19th Brigade of Don Carlos Buell ‘s Army of the Ohio had marched into Nashville, abandoned only the day before by its Confederate defenders. One of Hazen’s most trusted officers, Capt. Emerson Opdycke of the 41st Ohio writes his wife today about how happy he is to be in Nashville. “It is a beautiful city. People seem glad to see us. Many had left, supposing we would plunder and destroy; but they are now seeing their great error… I am delighted with Nashville and its surroundings.”

Not everyone welcomes the Union forces, however. Reporting a common reaction to their appearance throughout the war, Opdycke notes, “The women are by far the bitterest against us, knowing they can say what they pleased without fear of injury.”

(Pictured above: the 51st Ohio Volunteer infan try on dress parade in Nashville)