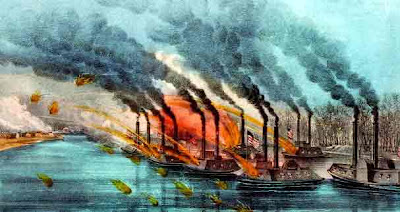 At about 11 a.m. this morning, Union Navy Flag Officer Andrew Hull Foote’s four ironclads and three wooden gunboats moved upstream on the Tennessee River. When the ironclads had reached a point about a mile from Fort Henry, Foote arrayed them side by side in a row, with the three timberclads about a half mile back. Then, on his own, Foote began rapid fire into the fort, the timberclads firing over the ironclads in front of them.

For slightly over an hour, the Confederate artillerists fought back, scoring several hits, the most serious of which pieced the Essex’s boiler, scalding 28 sailors. Meanwhile, Brig. Gen. Ulysses S. Grant’s 15,000 soldiers were still struggling through muddy, swampy, rain-soaked brush land to reach the fort. The plan had been for simultaneous water and land attacks, but Hull chose not to wait.

Fort Henry was a low, five-sided earthen structure, built on ten acres of swampy ground and exposed to flooding from the river. It mounted 17 heavy guns, but high water and lack of ammunition left only 9 guns to guard against a water approach—and even these guns were handicapped by their low elevation.

Having already decided he was badly outnumbered, shortly before the bombardment began the fort’s commander, Brig. Gen. Lloyd Tilghman, had evacuated most of his troops. He sent them cross country to Fort Donelson, a stronger fortification on the nearby Cumberland River, about 12 miles away. Tilghman himself chose to remain in Fort Henry, retaining only some artillerists to attempt delaying Union pursuit of the fleeing Confederate infantrymen.

Artillery fire from both the gunboats and the fort was accurate, with the Confederates scoring 59 hits on the Union vessels, although most did minor damage. However, one shot pierced the Essex’s boiler, scalding 32 men, and several of the fort’s artillery pieces were damaged. After an artillery duel lasting slightly more than an hour, with Union fire sweeping the fort, Tilghman and about a hundred men surrendered. Foote had to send a boat into the fort to arrange the surrender.

Grant’s infantrymen arrived about an hour later, no longer needed for an assault. Most of the fleeing Confederates reached Fort Donelson safely. Grant and his officers met and agreed they should attack Fort Donelson next, and do it quickly.

It was the first important Union victory of the war and it was won in the West under the leadership of Brig. Gen. Ulysses S. Grant. It pried open one of the Confederacy’s back doors, exposing critically important Tennessee to increasing Union pressure—but at the time few realized how important the Fort Henry and Fort Donelson campaign would prove to be.

Grant’s orders from Halleck had been to “take and hold” Fort Henry. No mention had been made of nearby Fort Donelson, but Grant has his dander up and wanted to keep on going. Not even bothering to ask permission, he wired Halleck, “Fort Henry is ours…I shall take and destroy Fort Donaldso[n] on the eighth and return to Ft Henry.”

Grant ended the day by writing to Julia: “Fort Henry is taken and I am not hurt. This is news enough for to-night. I have been writing until my fingers are tired and therefore you must excuse haste and a bad pen. I have written to you every day so far and you cant expect long letters. Kiss the children for me. Ulys.”

ELSEWHERE IN THE CIVIL WAR: In Kentucky, Col. William B. Hazen, acting commander of the 19th Brigade in Don Carlos Buell’s Army of the Ohio, issues yet another of his many orders. Hazen, an absolute bear for perfection in all things military, declares, “Colonels of regiments will at once see that all officers in their commands, field and staff, sutlers and retainers around camp, are fully instructed in the division and brigade orders pertaining to ht police and discipline of the camp…..” In other words, tuck in your shirt, cut your hair, pick up trash, and jump when ordered.

From Benton Barracks in Missouri, Brig. Gen. William Tecumseh Sherman, writes his former commander in Kentucky, Brig. Gen. Robert Anderson (the “hero of Fort Sumter”), that he has been busy organizing and sending out regiments to join various armies, but now Maj. Gen. Henry W. Halleck “promises me a command soon. I never did want to play a part in this war but want to do all in my power.” Apparently, Cump is recovering from his emotional break in Kentucky.