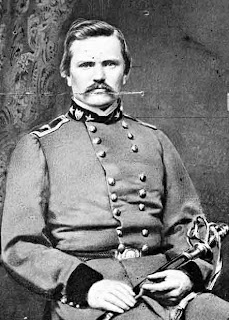 Col. William B. Hazen, commander now of the 19th Brigade in Buell’s Army of the Ohio, has spent three months rusticating in a pesthole known as Camp Wickcliffe in Kentucky. As was common in army camps early in the war, Camp Wickcliffe was tormented by health problems, especially diarrhea and measles.

A few days ago, Hazen’s brigade was shipped down the Cumberland River to join Grant’s siege of Fort Donelson, only to arrive after it was over. Hazen’s brigade came to rest at Paducah, while higher authority decided where to send it next. While at Paducah, Hazen met Brig. Gen. William Tecumseh Sherman for the first time.

Sherman, until recently sequestered in a backwater of the water, has suddenly been elevated to command of the District of Cairo. He is both excited at this unexpected opportunity and regretful still about his emotional breakdown in November. “All I hope for is a chance to recover from the past,” he writes his wife, Ellen. He also tells her he just had “a long interview” with Brig. Gen. Simon Bolivar Buckner (pictured above), the fallen commander of Fort Donelson and a Union prisoner, being held on a steamboat anchored in the Cumberland River.

Apparently, it was a fruitful discussion. “I used to know him well and he frankly told me of many things I wanted to know.” Buckner places the blame for his downfall on Maj. Gen. Albert Sidney Johnston, the Confederacy’s western commander. Writing his brother, Sherman says, “I have seen Buckner & prisoners of war, and learned many things not heretofore known.”

Hazen took a different view of Sherman’s meeting with Buckner, at which he was present. Before the war, Hazen had known Buckner well, considered him “a man of many fine qualities,” and was “touched at seeing him our prisoner.”

Perhaps because of that, Hazen was poorly impressed by the meeting at which Sherman “learned many things not heretofore known.” Hazen claimed the meeting “was destitute of an y element of cordiality,--a few cold words only passing between Sherman and Buckner,--the latter taking Sherman to task for opposing peaceable secession, who replied that the Southern people had no right to seize public property, and that they must not expect submission” [from the Federal government.]

Two views of the same small event. Sherman said Buckner “frankly told me of many things I wanted to know.” Hazen remembered only “a few cold words” passing between the two, concluding, “I was not agreeably impressed by the meeting.”

It was not the first time, and certainly not the last during this war, in which participants in an event would remember it differently—even if they belonged to the same side.,

ELSEWHERE IN THE CIVIL WAR: Although much of it will be scarcely remembered, there will be warfare in almost every corner of the United States. In New Mexico today, Confederates under Brig. Gen. H.H. Sibley drive the Federals under Col. E. R. S. Canby into Fort Craig., This is the battle of Valverde, named for a Rio Grande ford. This small battle included two remarkable events. At one point, Texas cavalrymen charged with lances. At another point, Union soldiers created an Improvised Explosive Device, consisting of a mule loaded with gunpowder. The mule was detonated and demolished, but no Confederates were harmed.

In Washington, meanwhile, there is mourning for Willie Lincoln, the President’s son, who died of typhoid yesterday in the White House.