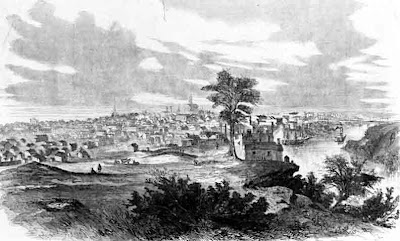 The streets of the Confederate capital of Tennessee are filled with rushing soldiers, men, and wagons, struggling to escape the city as Federal soldiers and gunboats approach.

Losing Nashville will be a severe blow to the Confederacy, for it is the breakaway nation’s main supply depot and rail center in the Western Theater. The Confederacy’s eight largest city, it is also an important industrial center and one the agrarian South can ill afford to lose.

With Grant’s capture of Fort Donelson, downriver from Nashville on the Cumberland, the city can no longer be defended. Grant has punched a hole through the center of the Confederacy’s so-called “Kentucky Line”—once a nearly straight line of defiance, running from Arkansas to the Appalachians.

Now Don Carlos Buell’s Army of the Ohio is descending on Nashville from the North. Federal gunboats are cruising the Cumberland. Grant’s victorious army is waiting ominously at Fort Donelson, where it captured 15,000 Rebel soldiers, and Confederate General Albert Sidney Johnston’s diminished army is split into two wings—one at Columbus, Kentucky, on the Mississippi River, the other at Nashville, but scrambling fast to get out.

For reasons having to do more with army politics than winning the war, Maj. Gen. Henry W. Halleck has denied Grant’s plan to advance on Nashville himself. But with a cunning and a determination that belie his quiet, self-effacing manner, Grant comes up with a work-around.

Imbued with the confident authority that comes from success in battle (and promotion to major general), he ignores department lines and orders two of Brigadier General Buell’s divisions, now near Paducah and separated from Buell, to advance on Nashville. These divisions had been ordered west to aid Grant’s attack on Fort Donelson, but had arrived too late. Grant co-opts them without asking Buell’s permission.

Buell will arrive in Nashville the day after tomorrow to discover that Grant has beaten him to the punch—using Buell’s own men. However, Grant is content to let Buell take the limelight for entering Nashville, so long as the point is won for the Union. Now Grant hopes to make an advance of his own.