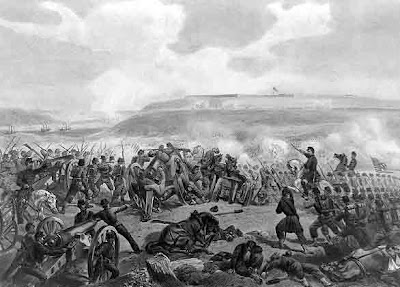 It is about 5 o’clock on a cold February morning, with most of Grant’s shivering troops arrayed outside Fort Donelson and trying to sleep, when suddenly shots ring out on the Confederate left. Confederates are pouring from the fort to attack Union Brig. Gen. John McClernand’s division, which forms the right side of the encircling Union army. Confederate Brig. Gen. Gideon Pillow’s division, bolstered by a second division, is trying to fight its way out and escape in the direction of Nashville.

Pillow’s men succeed in fighting their way through the surprised Union soldiers, but then comes another surprise. Brig. Gen. John B. Floyd, Fort Donelson’s commander and Pillow’s senior, orders the troops to return to the fort!

The escape was planned last night by Pillow, Floyd, and Fort Donelson’s third in command, Brig. Gen. Simon B. Buckner—the only one of the three generals who knew what he was doing. Although the fort had beaten off yesterday’s gunboat attack, other gunboat attacks were feared and so was the Union army, of unknown size, that was massing outside the breastworks. The Confederates did not feel they could withstand either a massive attack or a long siege.

Grant had gone downriver to meet with Flag Officer Foote (who had been wounded and could not come to Grant). Now Grant came rushing back. He ordered Brig. Gen. Charles F. Smith to attack the Confederate right while McClernand’s division, bolstered by a newly arrived third division led by Brig. Gen. Lew Wallace, plugged the gap Pillow had opened. And so the Confederates’ escape hatch was closed.

(Wallace, who would become more famous for writing Ben Hur than for his generalship, had been left behind at Fort Henry, but now a worried Grant summoned him and gave him 11 infantry regiments and a battery of light artillery. Among Wallace’s regiments were the 58th, 68th, and 76th Ohio who would, however, see only limited action in this fight).

This evening sees another meeting of the three Confederate generals and they agree to surrender the fort. Floyd, an incompetent “political general” and Pillow, a West Point graduate of no great ability, are senior to Buckner. Floyd, Buchanan’s secretary of war, fears treason charges if he’s caught, and Pillow just wants to escape. They agree to slip away by themselves and leave Buckner holding the bag, along with most of their troops. Somehow, the perpetrators of the South’s “Lost Cause” mythology forget to mention this spineless behavior by their generals.

ELSEWHERE ON THE BATTLEFIELD: While the soldiers rest and the Confederate generals confer, Mary Alice Bickerdyke, gratefully called “Mother” by the soldiers, roams the battlefield, ministering to the wounded and making sure no one is left behind. Born in Ohio, later an Indianan, Mother Bickerdyke is a self-appointed angel of mercy who irritates stuffed-shirt officers but is idolized by the soldiers.