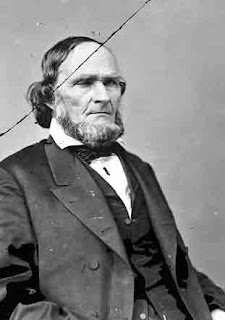 The most important people in the life of Brig. Gen. Ulysses S. Grant are his wife, Julia Dent Grant, and their four children. They form his snug harbor of safety, support, and love. Throughout the war, he will bring them to live at his headquarters whenever it is safe to do so.

Grant’s family has been living with him at Cairo, Illinois, headquarters of his District of Cairo, but now that the general is on the warpath, Julia and the children are about to leave the war zone and join Grant’s mother, father, and sister in Covington, Kentucky.

Grant’s mother and father are two pieces of work with whom the general has an uneasy relationship. His mother is a strangely silent monolith, a brooding presence who seems to live in her own world, neither reachable nor reaching out. Father Jesse (above, right) is one of those hard-headed, hard-shell strivers with whom nineteenth-century frontier America abounded, a man who expects to use his son’s position for his own benefit and who does not hesitate to complain to Ulysses about the conduct of the war. It can be safely assumed that words of praise from either parent are rare.

So, these days, when Ulysses writes home, he likes to write his sister, Mary. Still unable to advance from Fort Henry to Fort Donelson, he sits down with pen and ink “to let you know that I am alive and well.”

He goes to explain that he writes her “a very hasty and random letter simply to let you know that I believe you still remember me and [that we are] carrying on a conversation while [I am] writing with my staff and others.” He adds, “Julia will be with you in a few days….”

The unpretentious, plain-spoken Ulysses S. Grant, something of a stoic in his quiet manner, is not often self-revelatory, but to his sister he unbends a bit:

You have no conception of the amount of labor I have to perform. An army of men all helpless looking to the commanding officer for every supply. Your plain brother however, as yet, had no reason to feel himself unequal to the task and fully believes that he will carry on a successful campaign against our rebel enemy. I do not speak boastfully but utter a presentiment.

The father is so unwilling to credit his son that perhaps the son feels the need to make a statement to home base on his own behalf.

ELSEWHERE IN THE CIVIL WAR: The Joint Congressional Committee on the Conduct of the War, headed by Ohio Sen. Benjamin F. Wade, interprets its oversight role broadly and has a tendency to interfere or raise suspicions more out of war-time anxiety than real evidence. Eager to fix blame for the Union debacle at Balls Bluff, Virginia, last October, it recommends the arrest of Brig. Gen. Charles F. Stone on suspicion of treason. On War Department orders, Stone will be imprisoned for 189 days without charges or trial, then released without explanation. To this day, Stone’s imprisonment stands as an example of the injustices and violations of civil rights that can occur because of war-time paranoia.