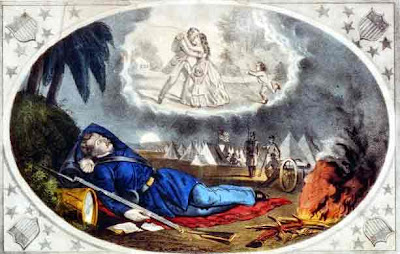 Lt. Col. Rutherford B. Hayes writes Lucy from , , western : “A merry Christmas to you and the little stranger (I suppose he is a stranger to you no longer)—and to all at home. At this home-happiness time I think of you constantly.”

Hayes dines in the sergeants’ mess of one of the companies of the 23rd Ohio, sharing in “an eighteen-pound turkey, chickens, pies, pudding, doughnuts, cake, cheese, butter, coffee, and milk, all abundant and of good quality.” Later, in his own quarters, Hayes entertains a dozen officers with oysters and crackers, and retires at

Sgt. Oscar D. Ladley, stuck with the 75th while it fills its ranks at Camp John Mclean near , yearns to go home in Yellow Springs but lacks the money for train fare. “I don’t like [camp life] nor never did,” he grumbles, never mentioning Christmas in his letter home. “It may look romantic to an observer, but to one who has to go through with all the hardships connected with it, it will make him think home in spite of himself.”

Cpl. Robert H. and the 21st in are given Christmas Day as a holiday, free to visit brother soldiers in neighboring camps or explore local curiosities. Caldwell and another soldier elect to explore a large cave about a mile from camp. They spent most of the day investigating the cave’s many rooms, sometimes crawling on their hands and knees, returning to camp “well satisfied” with their excursion.

Another corporal in the 21st, William Shanks, records in his diary, “We have a good dinner and I go out and take a walk for the first time.”

THE BIG PICTURE: ’s Cabinet spends four hours, from 10 1.m. to , discussing what to do about the affair. That evening, President Lincoln entertains a number of guests for Christmas dinner, advising one of them afterwards that the affair has been settled satisfactorily.

Your suggestions, comments, and questions are always welcome. Address the author: Ohioan@bloodtearsandglory.com

For more information about the author’s book, go to http://www.orangefrazer.com/btg