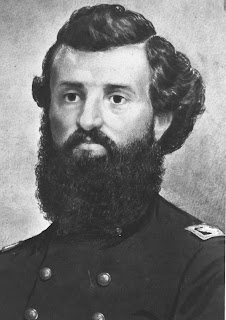 At Camp Chase outside today, a man who is having one love affair and beginning another writes his wife, Caroline, at their home in . The writer is Marcus M. Spiegel, a man passionately in love with Caroline, who he had met and married eight years earlier. But Spiegel (pictured here), who is captain of Company C in the newly formed 67th Ohio Volunteer Infantry, is also falling in love with army life.

“My dear & much beloved wife and children!” Spiegel practically shouts at the beginning of his letter (For clarity, most of the spelling and syntax in these excerpts have been changed.). “Here we have barracks large and commodious….My quarters are prepared with [a] bunk also & [are] as warm as can be….If I could only see you and the children once a day, I would feel as happy as I could wish.

“While I write you I can hear 2 bands playing and the drummers beating. This is a most magnificent day and the guard mounting& dress parade today [were] splendid.”

Spiegel ends by urging his wife not to worry, a soldier’s typical words that are typically ignored. “Farewell, my loves, & remember your ever-loving husband & father,” he concludes.

Spiegel is a Jew in an age of open anti-Semitism, although his winning personality seems to have spared him much of the usual hostility. Still, the feeling is there, if not always spoken. Moreover, Spiegel’s work as a wholesale merchant in had not spared him “pecuniary troubles…for the last 3 years.” So the army offers Spiegel a new opportunity to achieve success and esteem.

Eventually, Spiegel’s new love affair will affect his first one. Actions—especially those in war—have consequences.

Col. Marcus Spiegel’s picture appears here through the generosity of his great-great granddaughter, Jean Powers Soman. Colonel and Caroline Spiegel’s story is told in full in A Jewish Colonel in the Civil War, the colonel’s letters edited by Mrs. Soman and Frank L. Byrne.

OTHER OHIOANS TODAY: From Camp Union, , western Virginia, Lt. Col. Rutherford B. Hayes: of the 23rd bombards Lucy with rhetorical questions about their newborn son, not yet named, “Does the ‘face of the boy’ indicate the heart of the boy’? Do you love him as much as the others? Do you feel sorry the fourth [son] was not a daughter?” We do not know how Lucy answered, but we can guess.

Also from Camp Union, Col. Eliakim Scammon’s expedition of 5 companies—about half a regiment—marches south from Fayetteville to Raleigh (now Beckley), hoping to surprise a camp of sick Confederates further down the road. So far, the Federals have met no opposition nor surprised any Confederates. So it goes.

From in , Robert Caldwell of the 21st , Company I, cheerily writes his mother in , that “We live top top.” The dutiful son assures his mother that his tent and the area around it “are thoroughly policed every morning” for cleanliness and that his company has a wonderful cook, a Mr. Barnes. claims the company cook is skillful enough to work in a restaurant, making him a rarity among army cooks.

Another member of the 21st is less chipper. Alfred D. Searles, one of two brothers from Fulton County, Ohio, who are enrolled in Company H, complains to his family, “Here in camp…they is so many men and they hurried here by the thousands and the tens of thousands all expecting to be led on to battle and now within a few miles of the enemy we are stopped and commanded to lay here for near 3 months and not a man of us even to our colonels can solve the mystery or even guess what the meaning may be.” Innocent young men like Searles cannot guess what is coming. Before the war is over, the 21st will have seen all the combat it could ever want, and more.

Creating the mystery in Searles’ mind is Brig. Gen. Don Carlos Buell, commander of the Army of the Ohio. is urging Buell to action, but the slow, stubborn general is secretly waiting for spring so he can attack and on his own schedule and in his own way. Buell does not realize he has less than a year to prove himself.

ELSEWHERE IN THE CIVIL WAR: Brig. Gen. Ulysses S. Grant has returned from inspecting the troops under his command in the District of Cairo. Grant ordered some tweaking of troop locations, found many loyalist refugees living in a cave, and gathered intelligence about the number and disposition of Confederates in western Kentucky. Grant informs Union command in that he also has a spy in , busily mapping Confederate earthworks and eavesdropping on enemy conversations.