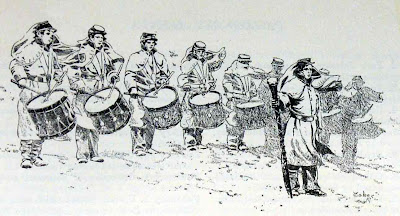 By now, in western resembles a fallen woman. Once a quiet little place of about 60 houses, a courthouse and a dozen or so other buildings, has become tawdry and tired looking since November. That’s when Union forces moved in to wait out the winter, taking over the buildings and re-naming the place “.”

Most inhabitants have fled, perhaps because their sympathies lay with the South or because they feared the town would become a battleground. Although pro-Union sentiment dominate western , the region is also home to a number of Confederate sympathizers. Some of these wage guerilla warfare on the Union forces.

Lt. Col. Rutherford B. Hayes of the 23rd records in his diary today that shelters 1,430 men from the 23rd, 26th, and 30th infantry regiments, plus an artillery battery and a company of cavalry.

With this many men crammed into what was only a pretty little village, has become, in the words of one soldier, “muddy, dirty, [and] God-forsaken.” Trampled by hundreds of soldiers and escaped slaves, the streets are deep with mud. Trees and fences have been cut down for fuel. Abandoned by its rightful inhabitants, is forlorn looking place.

On the other hand, no guerillas are operating in the immediate area and it is doubtful Confederate regulars will show up any time soon, so the Ohioans can look forward to a quiet, if boring, winter.

It would make little difference if the Ohioans were on their own soil. At Camp John McLean (yet another mudhole), near , Sgt. Oscar D. Ladley writes his family in Yellow Springs that “there is no excitement in camp of any kind. It is the same routine over every day. Drill eat and sleep.”

It is much the same everywhere. Soldiers and civilians alike wait and wonder what is coming.