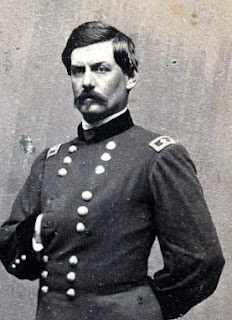 It takes nerve to be a soldier, but not all nerves are alike. When nerve means courage or daring, it is useful in the conduct of war, but when it means arrogance or gall, it isn’t useful at all. In this, the second week of July 1862, both kinds are on display.

In the Western Theater, a dashing Kentuckian named John Hunt Morgan (pictured upper left) is running circles around Union forces, capturing Federal strongholds and frightening the citizenry of Kentucky and nearby Ohio. On Wednesday, July 9, Morgan and his cavalry capture Tompkinsville, Kentucky, after whipping Union defenders. The next day, Thursday, July 10, the emboldened Morgan issues a ringing proclamation to the citizens of the border state, urging them to “rise and arm, and drive the Hessian invaders from their soil.”

The fact that few Kentuckians rose and armed themselves on Morgan’s behalf did nothing to quiet the fears of Cincinnatians, who understandably feared that their important city had fallen squarely into Morgan’s sights.—especially after Morgan captured Lebanon, Kentucky on Saturday, July 12. Tompkinsville was about 180 miles from Cincinnati; Lebanon was about 65 miles closer.

Morgan is a Southerner in the cavalier tradition: tall, handsome, daring, and courtly. His thousand-mile hit-and-run dash through a Kentucky dominated by Union forces is an act of pure nerve—and, although he will return to base in Tennessee without harming Ohio, he will return next year and do exactly that.

Another kind of nerve is on stunning display hundreds of miles east, on the Virginia Peninsula.

There, Maj. Gen. George B. McClellan (pictured upper right) and his huge Army of the Potomac have paused to catch their breath and decide what to do next. The Federals have been headed off, by Robert E. Lee, from their ultimate goal: the capture of the Confederate capital of Richmond. McClellan doesn’t realize it yet, but his elaborate, ponderous “Peninsula Campaign” has been for naught. This show is over.

But instead of studying what went wrong in his command and figuring out how to do better, McClellan sits down, takes pen in hand, and presumes to tell President Abraham Lincoln what kind of war he should conduct and how to conduct it. He dares to tell the President what his goals should be—and freeing the slaves, Little Mac tells Lincoln, must not be one of them. The Union armies must fight only to reunite the country while inflicting a minimum of damage on the South. The strategy must be to maneuver Rebel armies into defeat, instead of destroying them.

But McClellan exceeds his franchise by daring to tell the civilian government what its policies should be. This follows by a few days a telegram to Lincoln in which McClellan blamed the President for the losses on the Virginia Peninsula. Although McClellan’s forces outnumbered Lee’s, the union commander claimed he had been denied the reinforcements that would have made the vital difference. McClellan’s wire to Lincoln was so virulent that shocked War Department clerks deleted the worst of it before passing it on to the President.

On Tuesday, July 8, Lincoln comes to the Virginia Peninsula to review the troops and meet with Mc Clellan. Lincoln is having increasing doubts about Little Mac, and although he isn’t ready to dump the cocky little Philadelphian quite yet, that day will come.

On Friday, July 11, Maj. Gen. Henry W. Halleck, the Union’s top commander in Western Theater, is summoned east to become General-in-Chief of all the armies. Ever since McClellan was relieved of that post in March, Lincoln and Stanton have tried to fulfill its responsibilities themselves. It has become obvious—especially with growing questions about McClellan—that a professional soldier is needed. For the moment, at least, Halleck is highly regarded—but he will be tested severely.

OHIOANS ELSEWHERE IN THE CIVIL WAR: On Tuesday, July 8, Maj. Gen. Ulysses S. Grant, commander of the Army of the Tennessee, writes Ellen Ewing Sherman, now in residence in Lancaster, Ohio. Ellen has been campaigning to bring husband William Tecumseh Sherman home for a rest. Grant writes Ellen that he offered Cump a leave, but the offer was refused: Sherman claimed that “he was improving and would take good care of himself; and further his services could not be spared at this time.” So Grant and Sherman continue the struggle to contain Confederate activity in restless western Tennessee.

From his perch atop Flat Top Mountain in western Virginia, Col. Rutherford B. Hayes of the 23rd Ohio is grasping that McClellan has been repulsed at Richmond, but is “relieved and satisfied” that McClellan’s army is still in good shape and good position. Hayes is hoping to be sent to eastern Virginia, where he can see more action, and, in fact, on Saturday, July 12, gets orders to move 14 miles down the mountain to a new camp.