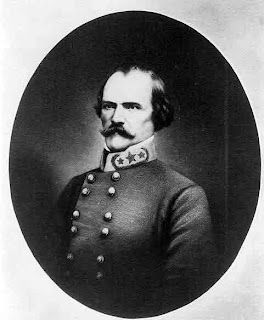 Shiloh: The Day Before

Late in day, Confederate Maj. Gen. Albert Sidney Johnston’s Army of Mississippi, numbering 45,000 men, arrives at the launch point designated for their attack on Grant’s encampment. As they settle down for the night, they are, in places, only half a mile from the outer edges of the Union Army of the Tennessee at Pittsburg Landing. (Johnston is pictured here)

Johnston’s second-in-command, Maj. Gen. P.G.T. Beauregard, is in despair. “The Little Creole,” as the fiery officer is nicknamed, is not one to shrink from fighting, but he fears the element of surprise has been lost. The inexperienced Confederate soldiers have taken two days longer than expected to make the march and they made it noisily, carelessly yelling and firing off their guns to try them out. Soldiers on the outer edges of each army have clashed several times, both sides taking small numbers of casualties.

Surely, Grant must be ready and waiting for Johnston.

Speculation that something is looming has been rising among the Union rank-and-file. Several Confederate prisoners have bragged to their captors that an attack is coming. One, dying from his wounds, has warned, “More will die.”

The commander of the 53rd Ohio, Col. Jesse J. Appler, orders his regiment into line of battle after he learns some scouts have been fired on by a Confederate picket line. When he tries to warn his division commander, Brig. Gen. William Tecumseh Sherman, Sherman snaps back, “Take your damned regiment to Ohio. There is no enemy nearer than Corinth:”

So nervous in Kentucky (and, later, Missouri) about the possibility of enemy attack, Sherman now has completely reversed himself, refusing to acknowledge whatsoever any sign of danger.

This afternoon, Sherman sends a message to Grant at Savannah, who is waiting for Brig. Gen. Don Carlos Buell’s reinforcements to arrive. Although Sherman provides some information about yesterday’s skirmishes between forward units, he concludes that the enemy is only being “saucy.” He concludes, “I do not apprehend anything like an attack on our position.”

Sherman’s opinion counts, because his division, now counting about 8,500 men “present for duty,” occupies the Union encampment’s most forward position, about two miles inland from the Tennessee River. Four other divisions are scattered about the rolling plateau and a fifth, Lew Wallace’s, is stationed several miles away.

Because Grant’s mind is fixed on making his own attack on the Confederates, who ordinarily would be expected to remain in Corinth, protected by their earthworks, Grant has ordered no earthworks of his own. His 41,000 troops at Pittsburg Landing are scattered about, arranged more for convenience than defense.

From his headquarters at Savannah, a few miles downriver from Pittsburg Landing, Grants wires two messages to his superior, Maj. Gen. Henry W. Halleck in St. Louis. In the first, he asserts that “the main force of the enemy is at Corinth” and their number “cannot be far from 80,000 men.” In the second, Grant mentions yesterday’s clashes, but concludes, “I have scarcely the faintest idea of an attack (general one) being made upon us but will be prepared should such a thing take place.”

At almost the same time as Grant is reassuring Halleck, the Confederate generals are gathered around a fire only a few miles from Pittsburg Landing. They are pondering their options. Beauregard argues for cancelling the attack and returning to Corinth, fearing a “victory turned into defeat” by an alert Union army. But Johnston—who is suffering public scorn for withdrawing from Nashville—apparently feels he cannot afford another seeming sign of weakness. The attack will go forward in the morning. Their horses will drink from the Tennessee River.

As the weary soldiers try to rest, some of them can hear a distant band playing. It is a Union band and it is playing “Home Sweet Home.”

IT’S COMING SOONER THAN YOU THINK: April 12, 2011—scarcely 3 years from now!—will be the 150th anniversary of the outbreak of the Civil War. In 1861, April 12 was the day Confederates opened fire on Fort Sumter in Charleston Harbor.