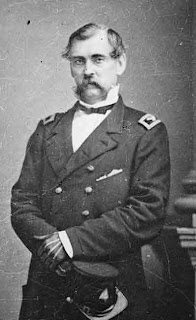 As ordered by Maj. Gen. Henry W. Halleck, Maj. Gen. Ulysses S. Grant today moved some of his forces from Fort Donelson on the Cumberland River to Fort Henry on the Tennessee River, preparatory to a major thrust southward. Grant expects to slice through western Tennessee as far as northern Mississippi.

Then came the shock: a blunt telegram from Halleck relieving Grant from command of the expedition, placing one of Grant’s division commanders—Charles F. Smith (pictured here)—in charge of it instead, while leaving Grant at Fort Henry. The terse telegram concludes, “Why do you not obey my orders to report strength and positions of your command?”

Years later, in his typically understated manner, Grant recalled, “I was surprised.” Grant had been reporting regularly, but neither his reports nor all of Halleck’s messages had reached their destinations. Later it would be discovered that a disloyal telegraph operator had blocked some communications before fleeing south.

Grant is stunned, although he assures Halleck he would obey. General Smith, to whom Grant turned over command, is dumbfounded by Halleck’s order as well. The order will be followed by days of baseless rebukes of Grant by Halleck, with Grant bewildered and heartbroken.

Grant’s shabby treatment was instigated by Halleck in the course of pursuing his own advancement. It is likely he exploited the communication breakdown, not only from frustration at Grant’s seeming disobedience, but from jealousy over his sudden fame and promotion because of the Fort Donelson success. Halleck gave Grant little credit for the achievement and even claimed it as his own, in hopes for expanding his command.

However, the situation will resolve itself, and soon.

IN OTHER NEWS: The United States Senate confirms Tennessee’s Andrew Johnson—the only southern U.S. senator not to resign in favor of the Confederacy—as military governor of Tennessee. Although eastern Tennessee is still in Confederate hands, most of middle and western Tennessee has fallen to the Union—and the Confederacy’s so-called “Kentucky line”—its east-west defensive cordon across southern Kentucky—has evaloprated.