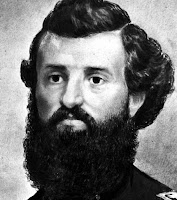 “I love you more than ever!”

Since driving out the Federals two weeks ago, Stonewall Jackson’s Confederates have occupied Romney, a key point near the eastern edge of Unionist western Virginia. The Feds want Romney back. and the 67th Ohio is among the forces rushed from Camp Chase in Columbus, Ohio, to western Virginia to deal with Jackson. Capt. Marcus Spiegel is a company commander in the 67th.

As usual in the army, however, it’s hurry up and wait. Tonight, Spiegel and 67th find themselves camped near New Creek, Virginia, and not doing much. Romney is less than 20 miles away, but Romney will be liberated without the help of the 67th, and Spiegel’s men will not see action for another month.

Captain Spiegel uses the time to write “My dear and much beloved Wife and Children!” and tell them “I am hale and hearty and God only knows that I love you more than ever!” (A German immigrant, he has not adopted the more laconic speech of his fellow Midwesterners.) Spiegel relates the regiment’s peripatetic existence since leaving Columbus January 19th. Flooding of the Ohio River prevented the regiment from setting up camp the first night of its journey. Instead, the soldiers had to spend the night in dirty freight and cattle cars.

The next night, Spiegel’s men had hardly escaped from the inexorable train cars and set up their tents beside the track when the 67th’s colonel came along and ordered them move to another spot. The next day the men reboarded the train to spend 26 straight hours riding in the filthy cars with only one two-hour break. Finally, last Saturday, the men were allowed off the train and were given a hearty breakfast before setting up their tents on a branch of the Potomac River.

All this activity has been demanding. “I never in my life have been kept as busy and constantly engaged. No place to write and no rest if I had [a] place, for [listening to] thousands of questions of the Boys.” The use of the word “boys” is significant. Many of the best commanders take a fatherly interest in their men, who feel warmest toward officers who take a nurturing interest in them.

Spiegel adds a postscript to this letter to Caroline: “My good little wife it is just 2 o’clock….Everybody sleeps. I suppose you do. Pleasant dreams and 1000 kisses to you and the children from your ever true Marcus….”

ELSEWHERE IN THE CIVIL WAR: President Abraham Lincoln is fed up to his eyeteeth with his major generals’ lack of aggressiveness. In the east, Maj. Gen. George B. McClellan, general in chief and commander of the Army of the Potomac, has done except claim an advance on Confederate defenses at Manassas was high risk; his claims of enemy force were later learned to be wildly inaccurate. In Kentucky, Maj. Gen. Don Carlos Buell, commander of the Army of the Ohio, has openly admitted he opposes Lincoln’s wish for an advance on eastern Tennessee. Further west, Maj. Gen. Henry W. Halleck seems unable to figure out how to work in concert with Buell (and, unbeknownst to Lincoln, he has just turned down Brig. Gen. Ulysses S. Grant’s proposal for an advance. Today, Lincoln finally acts like the commander in chief. He issued General War Order No. 1, demanding—not asking—that “the 22nd of February 1862 be the day for a general movement of the Land and Naval forces of the United States against the insurgent forces.”