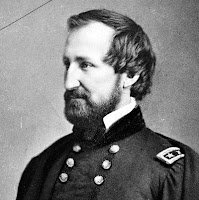 The American Civil War is notable for the number of colorful characters who emerge on both sides. One of these is William Starke Rosecrans (right)…an inventor, businessman, engineer…and memorable soldier.

Rosecrans soared into prominence early in the war but will drop from sight halfway through it.

Only a few months ago, Rosecrans was a businessman still recovering from severe burns suffered in a laboratory accident a year and a half before. Now he is a brigadier general of volunteers, charged with defending western against Confederate efforts to reclaim it. Today he must report to on his situation.

Born in in ’s mid-section in 1819, Rosecrans was the great-grandson of Stephen Hopkins, one of the signers of the Declaration of Independence.

The Ohioan was an excellent student at , graduating in 1842, fifth in his class.

While in the army, he served as an engineer building fortifications in and later was an instructor at . Like many other young officers who saw little chance for advancement in the arteriosclerotic army, he resigned in 1854 and turned to business.

He engaged in mining in western , produced many inventions (including one for making soap), and eventually became president of the Preston Coal Oil Co. While in a laboratory, a lamp exploded, burning him so severely that he was confined to bed for 18 months. The accident scarred him permanently, giving him (according to one observer) “a permanent smirk.”

Shortly after the outbreak of the Civil War, Gen. George B. McClellan called him into service in the western campaign of late spring and early summer of1861. Rosecrans planned and carried out a Union victory at , but McClellan got the credit (and gladly took it), then was called east to higher command. Rosecrans took over McClellan’s command of western , where he is now.

Rosecrans is a curious man: extremely bright, fond of his troops (who affectionately call him “Old Rosy”), but highly excitable and short-tempered. Moreover, since he converted to Catholicism while teaching at he has become obsessed with the subject, keeping his staff up late at night while he ruminates on religion. (Rosecrans employs a rich stock of profanity, which he excuses on the ground that he is "never blasphemous.") His enthusiasm for Catholicism is so strong that his brother converted as well, and became a Catholic cleric.

Rosecrans tends to favor his troops more than his officers. Ordinarily, he is a cautious and fussy commander, but he can be rattled. In battle, he tends to stutter with excitement. He does not lack courage, but his oscillation between caution and excitability will eventually cost him dearly.

This month, Union troops occupying western are settling into winter quarters, meaning a period of forced inactivity for both sides. There will be little more action than occasional skirmishes when enemy patrols brush each other in the winter woods. On this day Rosecrans writes an obligatory report to on the disposition of his troops. He reports having about two dozen regiments of volunteers, most of them from . That means he must protect several thousand square miles of rugged landscape with an estimated 15,000 men, dispersed in small groups among the hills and valleys. Union forces are vulnerable to attack at any point by a concentrated force. But so are the Confederates.

>>> Combined naval and army operations threat the Confederacy’s Atlantic coastline, with footholds already won at , and around Port Royal Sound, near . Planters begin burning cotton to prevent it falling into the hands of the Federals. Employing the hyperbole often heard from Confederates, the Mercury cries, “Let the torch be applied whenever the invader pollutes our soil.”

Your suggestions, comments, and questions are always welcome. Address the author: Ohioan@bloodtearsandglory.com

For more information about the author’s book, go to http://www.orangefrazer.com/btg